Where iPhones Go to Die, and Be Reborn

At a dedicated factory with 24-hour security in an undisclosed location in Hong Kong, iPhones are being carefully and meticulously destroyed.

Apple has sold more than 570 million iPhones since that January morning nine years ago when Steve Jobs stepped on stage in San Francisco to “reinvent the phone.” Even Apple doesn’t know how many of those phones are still out there—in the hands of their second, third, or fourth owner, or sitting forgotten in a drawer. But the company wants to ensure as few as possible end up in landfills.

That’s the job of the plant in an industrial park in Hong Kong’s Yuen Long district belonging to Apple contractor Li Tong Group. This is where iPhones, iPads, and iMacs go to die.

While global brands including HP, Huawei, Amazon, and Microsoft also have detailed protocols for recycling their products, Apple’s are the most rigid and exacting, according to people involved in the processes, who declined to be identified because they’re not authorized to speak about clients.

“I think people expect it of us. I think our customers hold us to a high standard,” Lisa Jackson, Apple’s head of Environmental Affairs, said by phone from the company’s Cupertino headquarters. “It’s difficult, because these are incredibly complex pieces of product.”

Neither Apple nor Li Tong would provide access to the Hong Kong facility, say how many units it recycles, or give specifics of the de-manufacturing process.

In the electronics recycling business, the benchmark is to try to collect and recycle 70 percent, by weight, of the devices produced seven years earlier. Jackson says Apple exceeds that, typically reaching 85 percent, including recycling some non-Apple products that customers bring in.

That means it will have to get hold of and destroy the equivalent of more than 9 million of 2009’s iPhone 3GS models this year around the world. With iPhone sales climbing to 155 million units last fiscal year, grinding up Apple products is a growth business.

Closely held Li Tong, which also recycles equipment from other manufacturers, has three sites in Hong Kong and a dozen more worldwide. It expects global capacity to climb more than 20 percent this year, including a new facility in San Francisco.

Apple said it collected more than 40,000 tons of e-waste in 2014 from recycled devices, including enough steel to build 100 miles of railway track.

Brightstar Corp., based in Miami, Florida, TES-AMM in Singapore, Hong-Kong’s Li Tong, and Foxconn Technology Group, the most famous manufacturer of iPhones, are part of a global network of recyclers that agreed to more than 50 rules, ranging from security to insurance to auditing, in the destruction of the phones.

The process starts at hundreds of Apple stores globally, or online, where the company offers gift certificates to lure iPhone owners to sell back their devices.

After a quick test, the recycler will either buy the phone or offer to scrap it for free. In the U.S., payouts for working phones range from $100 for the smallest capacity iPhone 4 to $350 for the largest iPhone 6 Plus. More stringent testing then shows whether the handset can be resold or must be scrapped.

Apple’s U.S. recycler declined to comment while Terence Ng, director of South East Asian partner TES-AMM, didn’t respond to email and phone messages. Once Apple’s partners decide a phone must be scrapped, a deconstruction process begins that is remarkably similar to Apple’s production model, only in reverse.

Apple pays for the service and owns every gram, from the used phone at the start to the pile of dust at the end, said Linda Li, chief strategy officer for Li Tong. The journey, consisting of about 10 steps, is controlled, measured, and scripted through vacuum-sealed rooms that are designed to capture 100 percent of the chemicals and gasses released during the process, she said.

Reclaimed iPhones can’t be shipped across regions, must have their storage wiped, and must have all logos removed. The scrap can’t be mixed with that of other brand names, so recyclers need to have dedicated facilities for Apple, Li said. Apple staff monitor the process at Li Tong’s factory, which employs about 300 people.

While some brands salvage components such as chips that can be used to repair faulty phones, Apple has a full-destruction policy.

“Shredding components takes more energy than repurposing,” Li said. Li Tong works with other customers to advise on how to design products that are easier to deconstruct, such as taking cameras from smartphones for reuse in toy drones, and adapting screens from Microsoft Surface tablets to use in New York taxis, she said.

Apple shreds its devices to avoid having fake Apple products appearing on the secondary market, Jackson said. The company is working on ways to reuse components in the future, she said, declining to elaborate.

“There’s an e-waste problem in the world,” she said. “If we really want to leave the world better than we found it, we have to invest in ways to go further than what happens now.”

And once it’s ground into shreds, what becomes of your old iPhone? Hazardous waste is stored at a licensed facility, and the recycling partners can take a commission on other extracted materials such as gold and copper. The rest is reincarnated as aluminum window frames and furniture, or glass tiles. 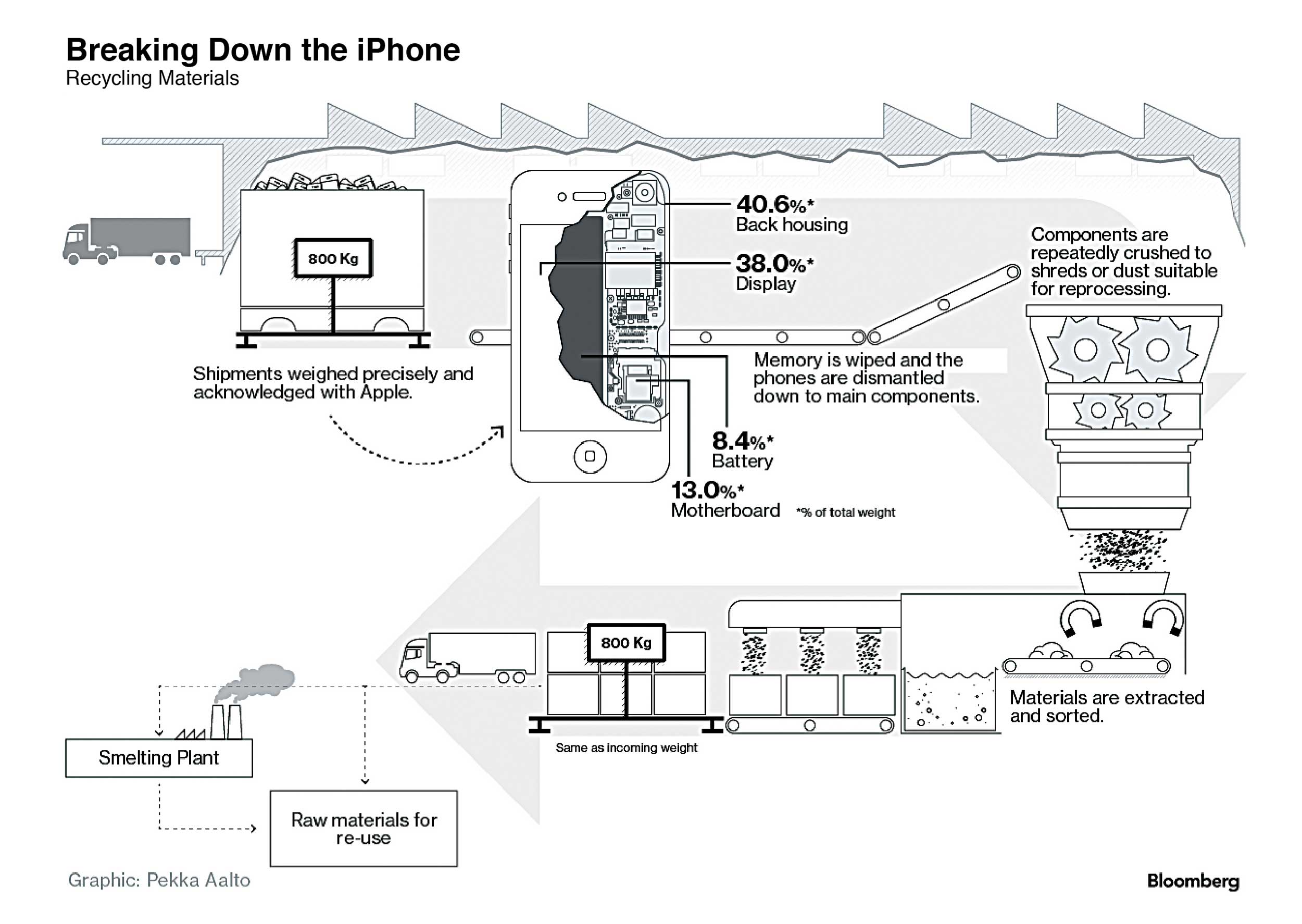